When we look at isolation as a cornerstone of truth, we can focus on three different flavors of isolation:

(refer to The Deep Self)

Mystical isolation differs from the other two types of isolation in that it asserts that there are universes and bodies of a human other than the physical. A wide variety of mystical traditions hold this viewpoint. We take a brief survey of them in this part.

Cut free from the chains of the outer senses, we are now free to dive deep into our ever present Self – the Alive Inner Sense. There is a rich body of religious literature documenting this:

The mystic is one who has attained cosmic consciousness by a complete severance of the seats of consciousness and sensation. He is then almost totally unaware of his body and is totally aware of the Light of God centering him.

The way to gradually attain cosmic consciousness is to intensify one’s conscious awareness by much aloneness and companionship with God while manifesting Him in every moment and in every task of life.

The deterrent to cosmic consciousness is the feeling that God is far away instead of being within, and that we can reach that far away God only through sources outside of ourselves.

Walter Russell “The Secret of Light”

Rightly understood, instead of possessing a sentient material form, man has a sensationless body… sensation in the body implies a diseased tendency. Even on the human plane we are not conscious of heart, lungs, eye, or ear, unless mortal mind is offering a report of some discordant condition, and the remedy for this is to lift the discordant thought from the body, or, as the Master has bidden us, “Look up, and lift up your heads.”

Mary Baker Eddy “Science and Health with a Key to the Scriptures” 280:25

Mary Baker Eddy to points us to this sensationless body. She and other Christian Scientists have used this body to effect miracle cures on the physical body simply by changing the person’s thinking patterns. Isolation Tank Gnosis advocates the isolation tank as another approach to dwelling in the sensationless body.

Let’s leave Christian Science and bop on over to Theosophy:

The WISE ONES tarry not in pleasure-grounds of senses…

The Self of matter and the SELF of Spirit can never meet. One of the twain must disappear; there is no place for both.

… the bud of personality must be crushed out, the worm of sense destroyed past resurrection

… Then will she show thee the means and way, … glories untold, unseen by any save the eye of Soul.

Helena P. Blavatsky “The Voice of the Silence”

There is no end to Blavatsky’s exhortations to seek the world beyond the senses. After reading “The Voice of the Silence” you are salivating to experience what she writes about. But WHERE is the technique to liberate the Recluse from the outer senses? Well, thankfully for us, ol’ JCL designed the isolation tank.

Our vanity convinces us that the machine is awake and supports this illusion with activity, sensation, and associative thought.

E.J. Gold is a spiritual teacher in the vein of G.I. Gurdjieff. His central postulate is that human beings are asleep – they are nothing but a bundle of reflexes with no genuine freedom to act – they only react the way a machine does — you push this button, you get this response. E.J. states that sensation is part of what holds the Recluse imprisoned in a sleep from cradle to the grave. Why don’t you take a dip in the warm salt waters for 8 weeks and see what reduction of sensory stimulation does for creating a truly awake being?

Let’s take one more quick dip in Western spirituality before heading to the Far East:

And here is what the mystical Christian Meister Eckhardt had to say:

I dont think any discussion is needed on that. And about the nun St. Teresa of Avila we have:

The kernel of Teresa’s mystical thought throughout all her writings is the ascent of the soul in four stages… The fourth is the “devotion of ecstasy or rapture,” a passive state, in which the consciousness of being in the body disappears (2 Corinthians 12:2-3). Sense activity ceases; memory and imagination are also absorbed in God or intoxicated.

During the short time the union lasts, she is deprived of every feeling, and even if she would, she could not think of any single thing… She is utterly dead to the things of the world… The natural action of all her faculties (are suspended). She neither sees, hears, nor understands.

The floatation tank is the perfect place to be in the pit of the senses (the planetside trip here on Earth) yet not under their control. I’m sure the rishis in the caves of India foresaw the development of the isolation tank for this purpose. You see, in the Upanishads, a human being is likened to a city with ten gates. Nine gates (eyes, nostrils, ears, mouth, urethra, anus, etc.) lead outside to the sensory world. The third eye is the tenth gate and leads to inner realms housing myriad spaces of consciousness.

Now let’s continue our tour of India with a look at Yoga. Yoga, rightly understood has 8 steps:

If you notice, the 5th step is withdrawal of the senses. Everything before that is designed to increase your proficiency at withdrawing the senses. So, if you can withdraw the senses directly, then there is no need for any of the lower steps (such as spending years twisting yourself into a pretzel. That is known as “Asana”, or step 3). And what do you imagine that Isolation Tank Gnosis advocates as a way to withdraw your senses? Just take a guess!

One other thing to note: the “final step” is samadhi. However, the person who codified the Yoga Sutras, Patanjali, stated that there are hundreds of samadhis beyond the initial samadhi. For this reason, when a member of Isolation Tank Gnosis is asked: “are you realized?” we simply reply that we are here to faciliate a process and that our personal state is irrelevant.

While we are visiting the East, let’s take a look at a Buddhist monk setting himself afire: 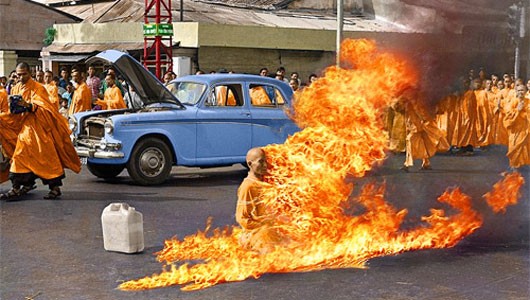 Buddhist nirvana occurs when one no longer craves or rejects sensation. Quang Duc, a Buddhist monk, set himself on fire and remained perfectly still. He was free and happy of the senses. A Recluse does not master his senses, but he does get away from them.

Since scientology is so similar to Buddhism and the systems have similar theoretical foundations (NOT), it is only fitting that we continue with a look into the viewpoint of Scientology on sensation:

In the Motions Universe, we have the beginning of real sensation as we know it now. … And as people became more attached to sensation, it became possible to control and confuse them by hitting them with waves of sensations. And so we have the individual much more at effect than he was previously.

Well, that was a nice all-expense paid trip through a variety of spiritual systems and their insistence on freedom from the mortal senses as a crucial step in spiritual growth. Armed with this information, we may now be motivated to slay the dragon of the outer senses. Each system has their approaches to the issue, Isolation Tank Gnosis recommends the Jenny Craig calorie counting app on the Apple app store as the supreme approach to reducing the effect of sensory stimulation on the carbon-oxygen machine operating at 98.6 degrees fahrenheit. Oops, I mean we recommend the Isolation Tank as a way to achieve isolation and god-realization.

Now we come to the isolation tank…